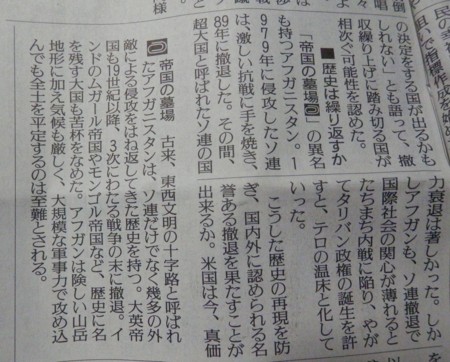 英語の用法「Afghanistan is the graveyard of empires」

In the first place, Chinese officials will likely come to regret making Pakistan, in their words, the “flagship” of the Belt and Road Initiative, with some 40 projects, valued at an estimated $25 billion, under way there. Beijing believes that it can succeed in transforming the country after Washington has struggled for decades there. But it shouldn’t count on it.

In the 1950s, Western economists arrived in Pakistan and tried to help the newly independent country fashion a long-term development plan. But as poorly coordinated aid poured in, Pakistani officials resisted setting priorities and making difficult reforms. “When I went to Pakistan, I had the $60 million to spend and no plan, no program, nothing,” recalled John Bell, who oversaw U.S. foreign aid to Pakistan in the mid-1950s. Asked for a list of priorities, the head of Pakistan’s Economic Planning Ministry replied, “No, we need everything, we need everything.”

Intended to last 18 months, the foreign advisory mission launched more than a half-century ago essentially never ended. Eventually, the World Bank stepped in as well, and over the years, the U.S. has provided Pakistan with more than $80 billion in aid. Last year, the International Monetary Fund bailed out Pakistan for the 22nd time. If neighboring Afghanistan is the graveyard of empires, Pakistan is the black hole of foreign assistance.

The Imperial Overreach of China’s Belt and Road Initiative - WSJ